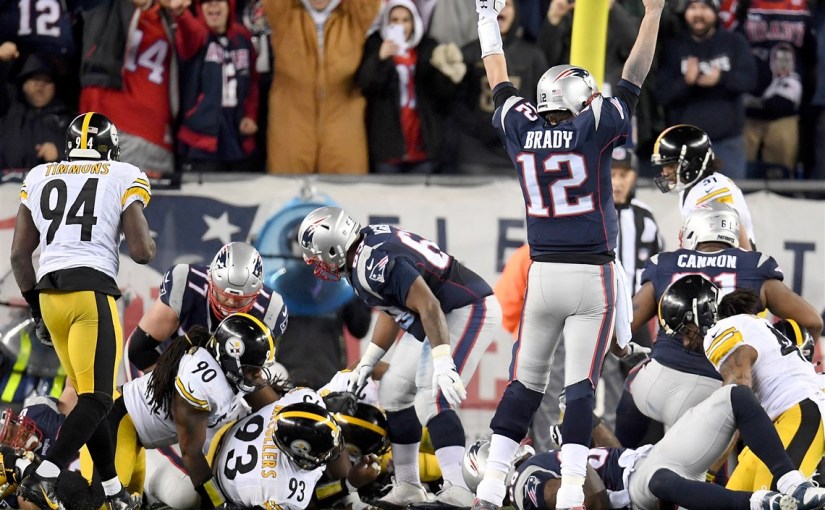 Today’s game against the Pittsburgh Steelers is probably the most important game of the season for the Patriots, as the team that emerges victorious will likely secure home-field advantage in the AFC.  The Patriots need to bounce back from last week’s dud against the Miami Dolphins, as winning today will make their road to Super Bowl LII much easier.

Here are a few things to consider entering today’s game.

1. Tom Brady vs the Steelers’ defense

TB12 has had the Steelers’ number for the last 16 years, compiling a 10-2 record against them (including the playoffs). Brady has made a living carving up the Steelers’ preferred zone defense, and his mastery of Pittsburgh can be exemplified by last year’s AFC Championship, where he threw for over 340 yards and 3 touchdowns. Brady has been dreadful over the last 2 weeks, throwing only 1 touchdown, while throwing 3 interceptions. Maybe a familiar prey will be enough to get Brady out of his slump…

2. Can the Patriots slow down the Killer B’s?

The Patriots’ defense faces a tall task today, as they will need to stop Antonio Brown and Le’veon Bell to have any chance of leaving Heinz Field with a win. Brown has been lighting up opposing defenses recently, ensuring that his name remains in the MVP race. The Patriots’ secondary has come a long way since September, and should be encouraged by their last encounter with Brown in January, where they made him a non-factor. The Patriots will also have to do their best to stop Bell, who has been remarkable lately. Bell left January’s AFC Championship game early with an injury, and maintains that the Steelers would have won if he had stayed in the game. Today’s game will show if he was right.

Rob Gronkowski will be back in the lineup for the Patriots, after serving his one game suspension for a late hit during Week 13’s tilt against the Bills. Gronk’s absence was clearly felt during last week’s loss in Miami, as the Patriots’ offense lacked rhythm and explosive plays. Gronk has been a nightmare for the Steelers’ defense ever since he entered the NFL in 2010, recording 8 touchdowns in 5 career games against them. It would be foolish to assume that this trend will not continue.

Last week’s loss at Miami was likely a wakeup call for Bill Belichick and his staff, as it exposed several flaws in the Patriots. Knowing Belichick, it is obvious that he has done his best to assure that the Patriots have worked to minimize their errors. Gronk’s return should be the spark that revitalizes TB12, and allows the Patriots to carve up Pittsburgh’s defense.