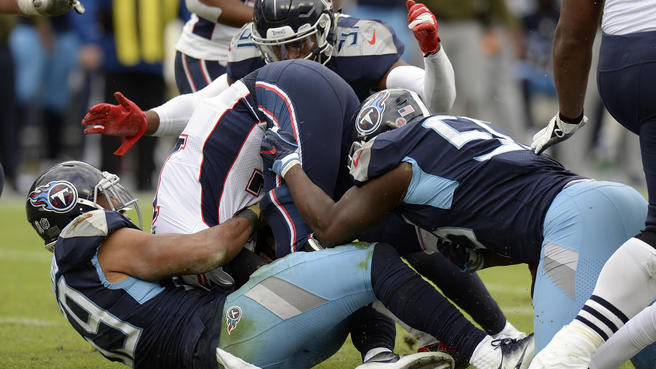 The Patriots’ 6-game winning streak was snapped today in Nashville, as they were routed 34-10 by the Tennessee Titans (5-4). The Pats fall to 7-3, which increases the gap between them and the AFC leading Kansas City Chiefs (9-1). Tennessee was able to outplay the Patriots in all 3 phases of the game.

Here are some takeaways from today’s loss.

The Titans entered this game as the NFL’s top scoring defense, and they did not disappoint, as they limited the Patriots to a season low 10 points. Mike Vrabel and Dean Pees were able to craft a game plan to get after Tom Brady and constantly disrupt his mechanics and timing. Tennessee halted any momentum the Pats’ offensive line had had prior to today, as they were able to frequently penetrate through the middle and stifle the offense.

Julian Edelman was one of the sole bright spots for the offense, as he corralled 9 catches for 104 yards and was frequently a security blanket for Brady. Unfortunately, Edelman took a beating throughout the game, and left the game in the fourth quarter due to an ankle injury. Josh Gordon had 4 catches for 81 yards, but a finger injury suffered last week definitely affected his ability to catch, as he dropped a key pass in the first half that halted a drive that could have allowed the Patriots to tie the game early on. The rushing game was utterly non-existent for the Pats, as Sony Michel had only 31 yards (off 11 carries) in his return from injury.

The Pats need to reevaluate their offensive game plan to ensure their success as the season progresses.

2. The defense got overwhelmed

Marcus Mariota had his best game of the season as he had 228 yards and 2 touchdowns. Mariota and Corey Davis (7 receptions for 125 yards and 1 touchdown) combined to make life miserable for the Patriots, as they were able to efficiently stretch the field at will. Following a series of remarkable performances, Stephon Gilmore had a clunker today, as he was frequently beat by Davis, and committed a few penalties.

The defense was not much better at stopping the run, as they gave up 150 yards, with Derrick Henry (11 carries for 58 yards and 2 touchdowns) and Dion Lewis (20 carries for 57 yards) leading the way for Tennessee.

It was disappointing to see the Pats take a step back on defense, but I have faith in their ability to bounce back from this.

3. Special teams was dreadful as well

Special teams was a disaster for the Patriots, as big kickoff returns and punt returns enabled the Titans to start drives with great field position. For example, the Titans opened the game with a 58-yard kickoff return on their way to a opening drive touchdown. At one point in the game, the Titans’ average starting field position was at the Pats’ 42 yard line, while the Pats started at their own 24.

Games such as the Pats’ Week 7 win at Chicago can show the impact of a great performance on special teams.

2 of the Patriots’ losses this year have been at teams coached by ex-Patriots ( Week 3 at Detroit and today against Tennessee). Both games were similar, as Brady got constantly hounded, while the defense could not stop the pass or run. It appears as if Matt Patricia and Mike Vrabel are very familiar with the chinks in the Pats’ armor.

This factor makes today’s loss less concerning, even though the Pats definitely have their work cut out for them.

What’s next?: The Pats head into their much needed bye week before heading to New York to face the hated Jets (3-7) on November 25th during Week 12.